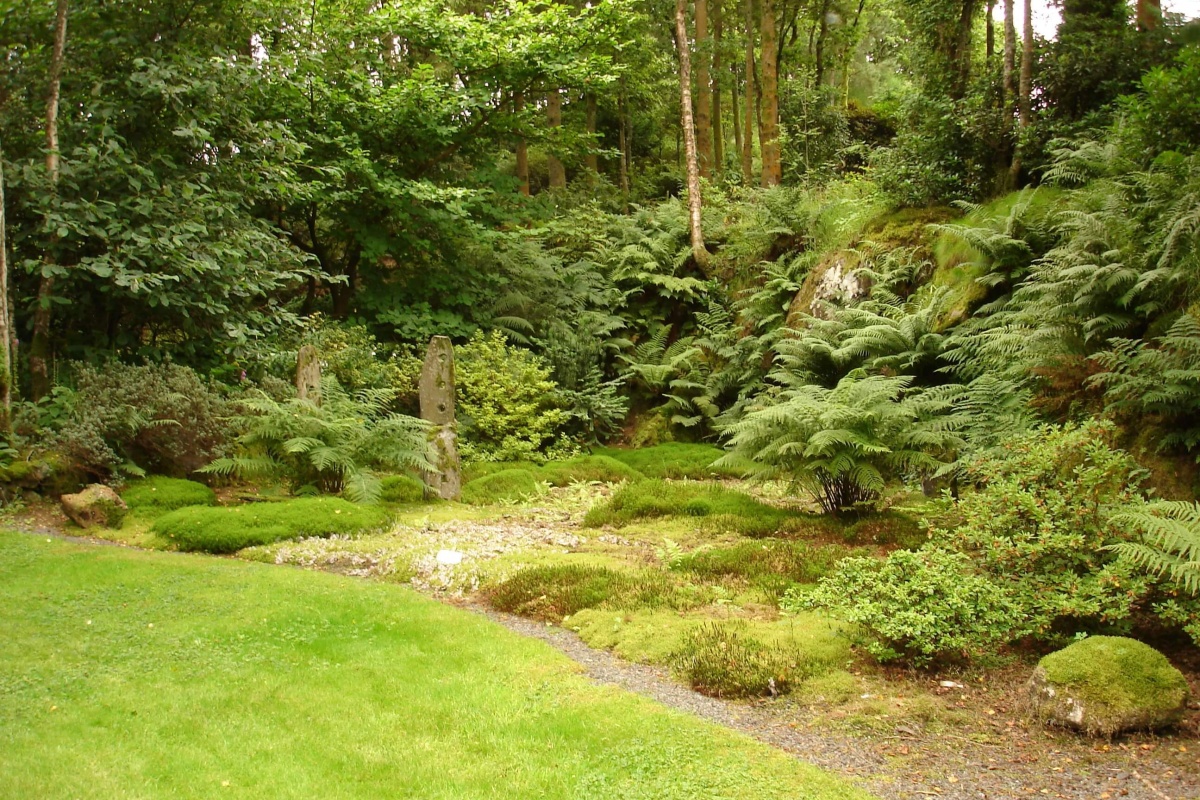 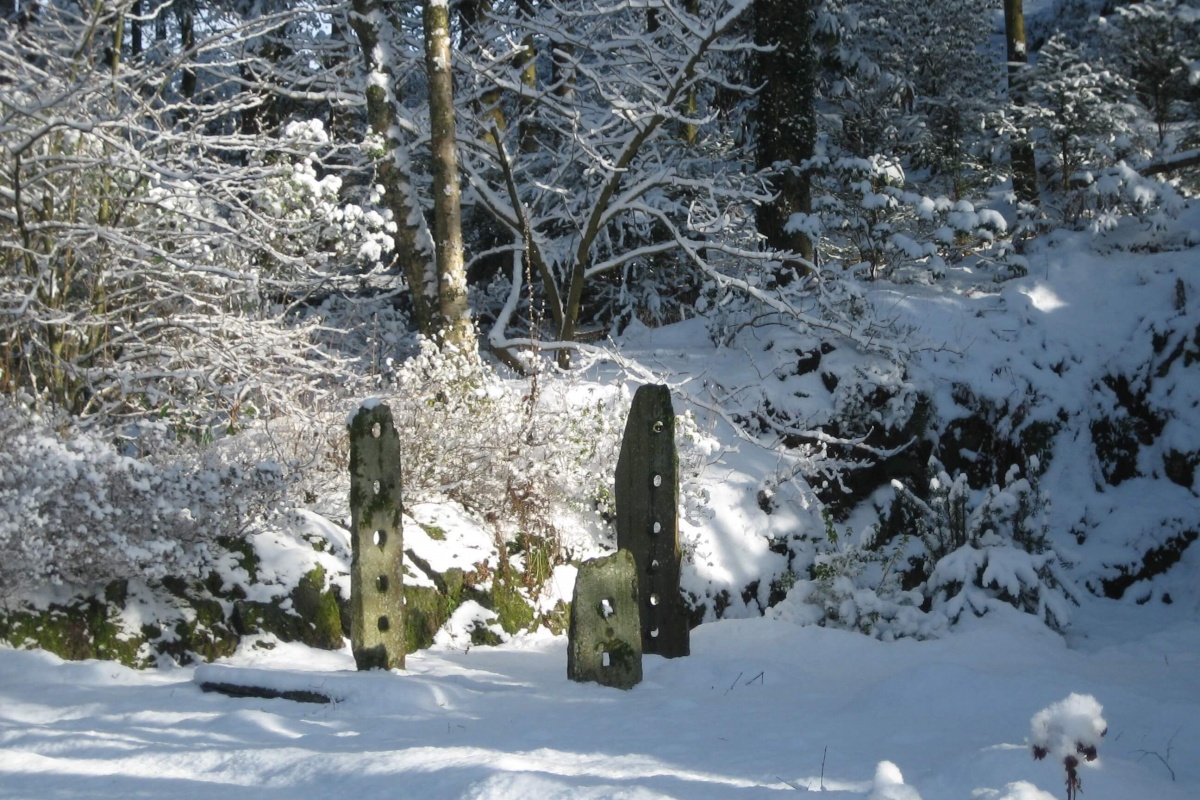 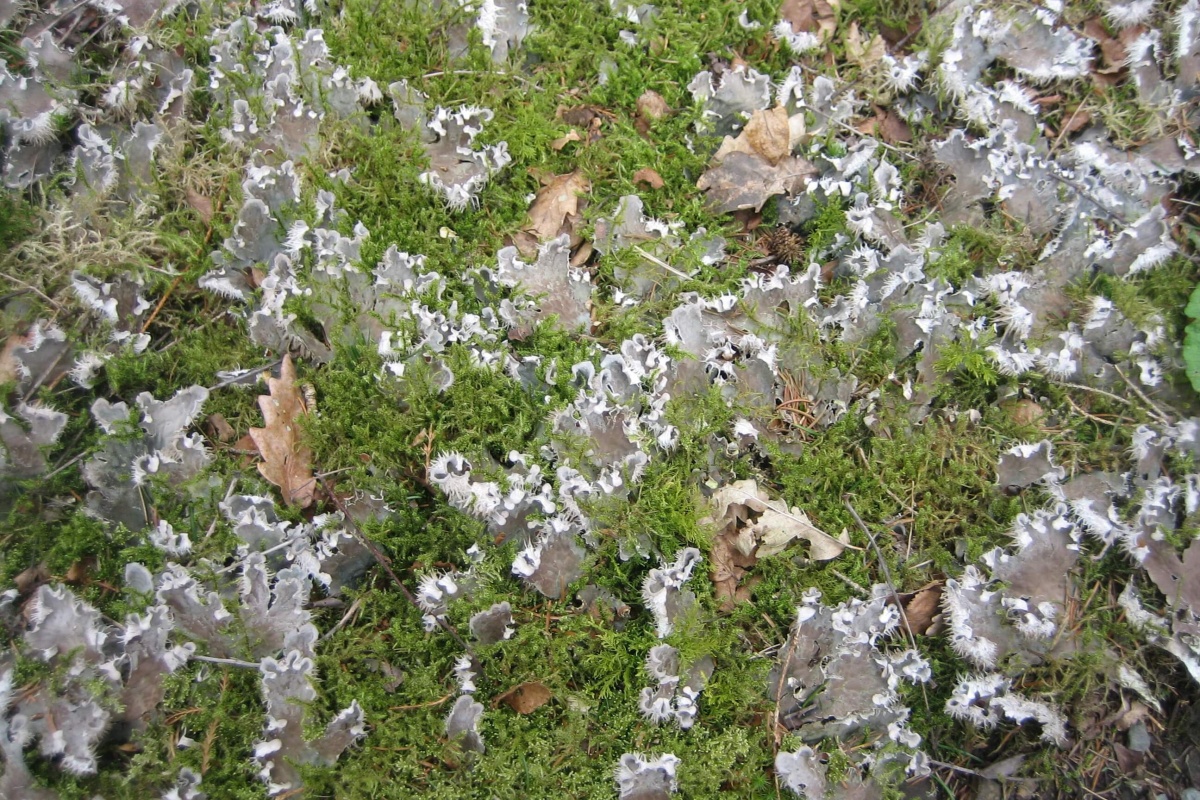 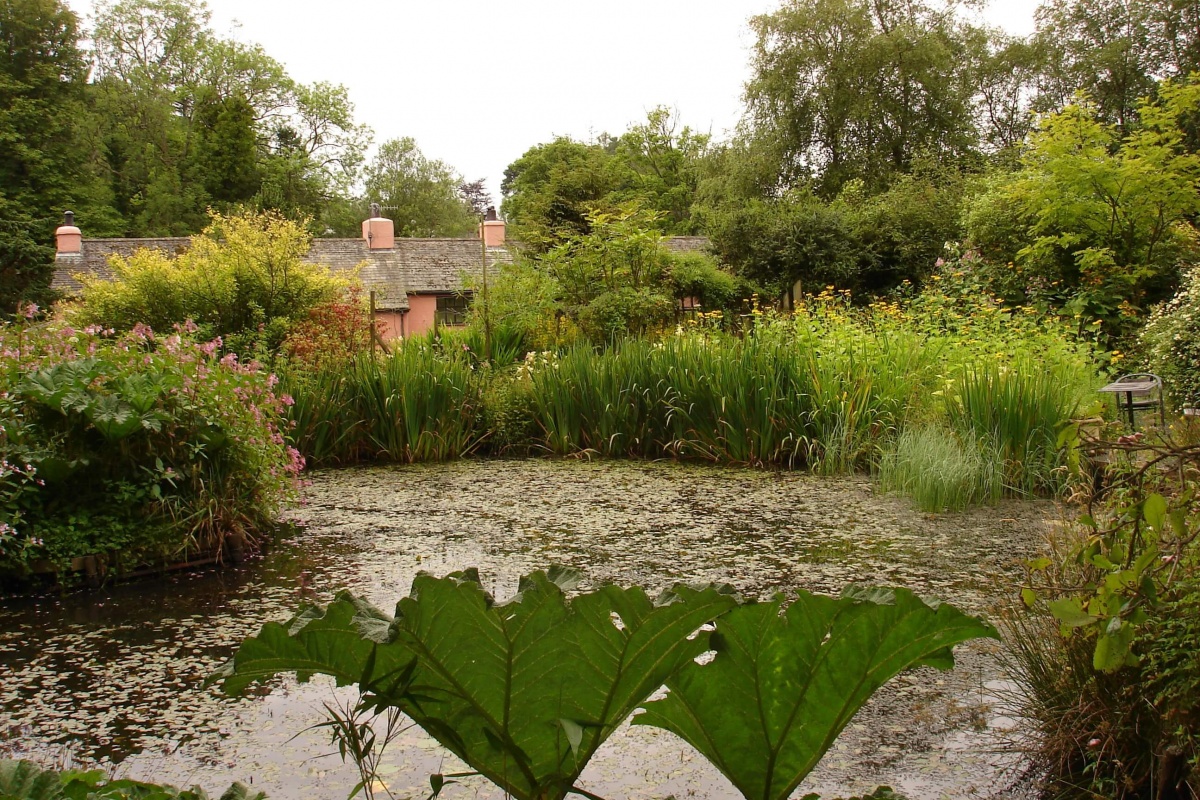 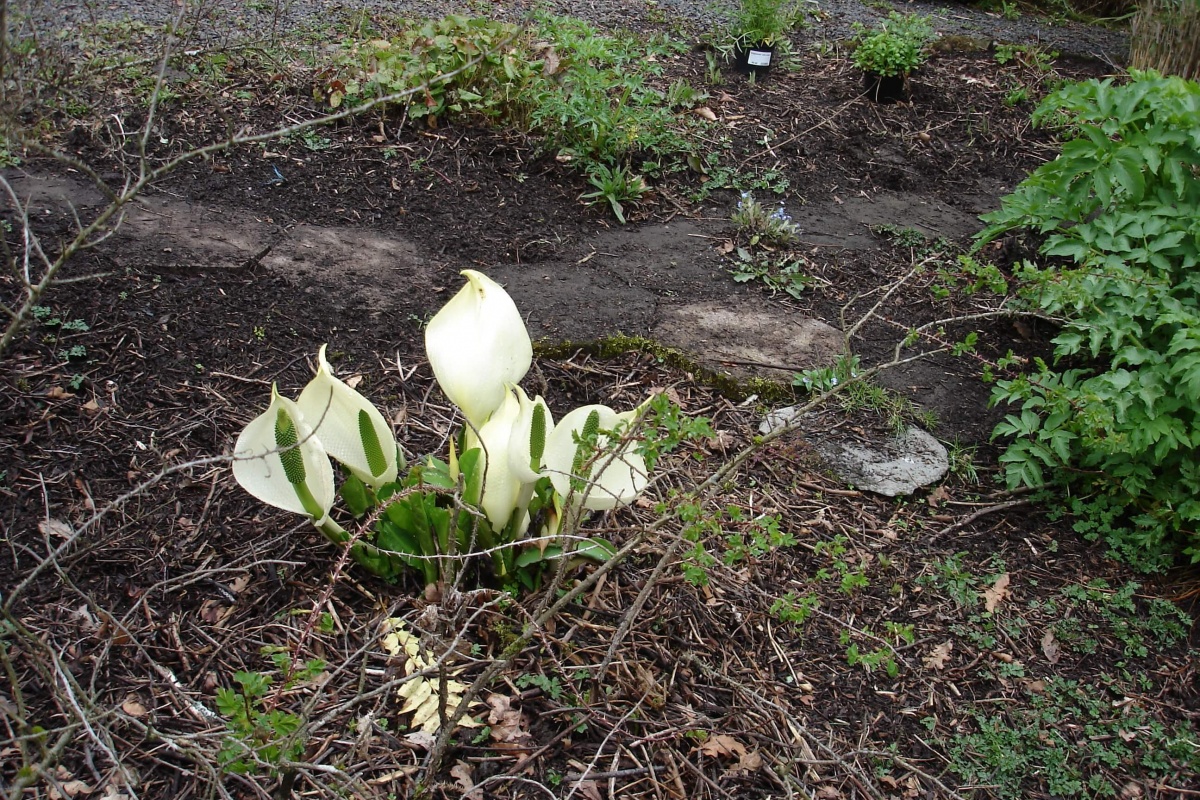 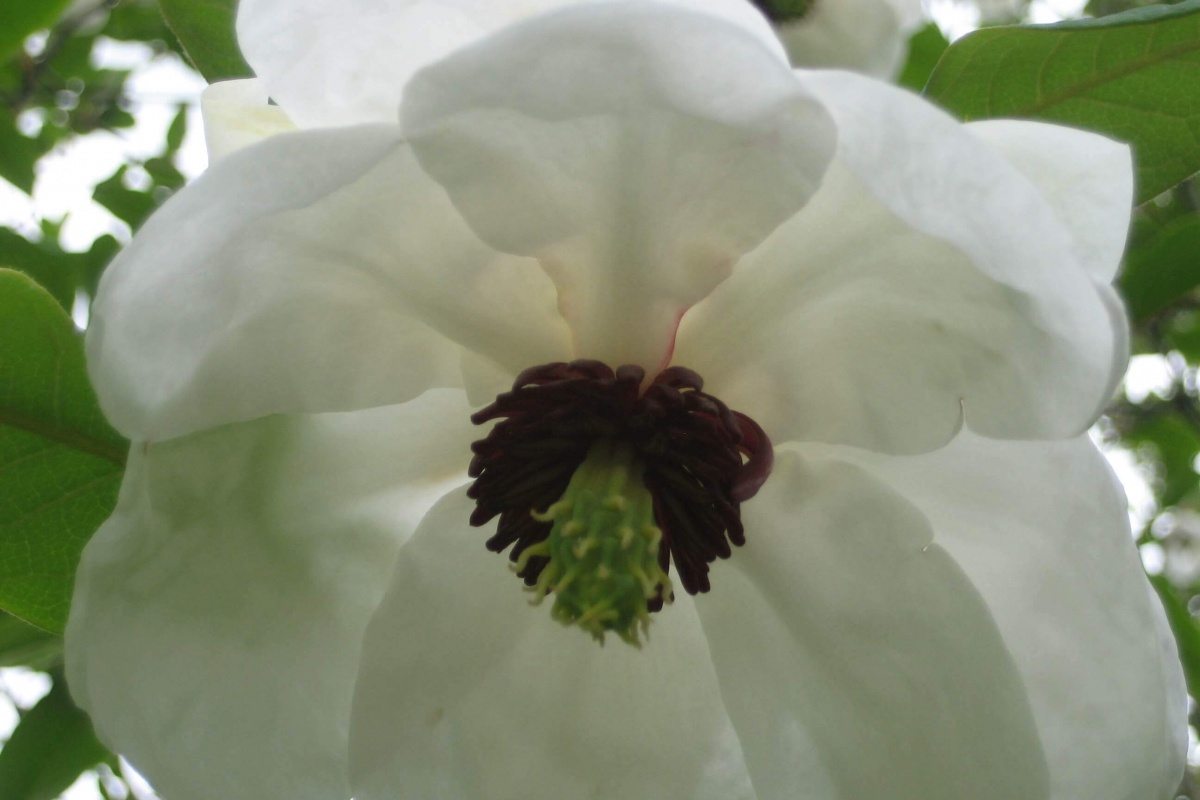 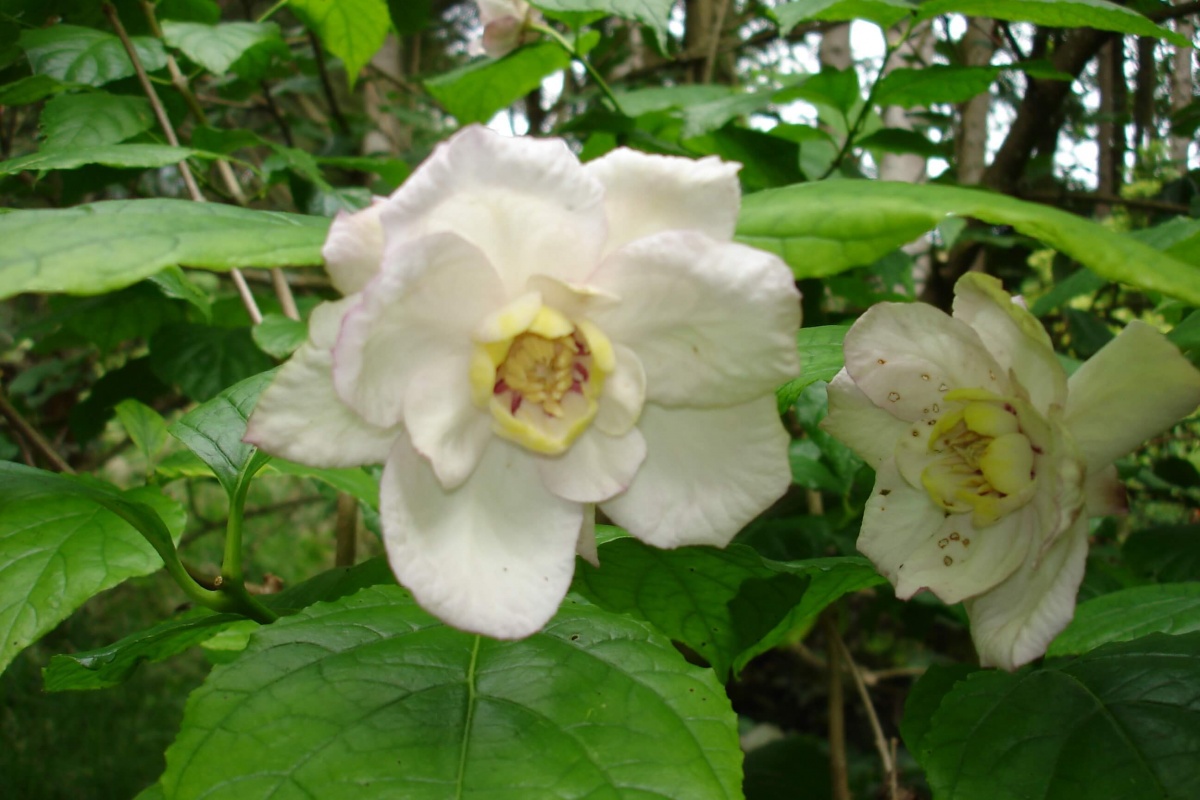 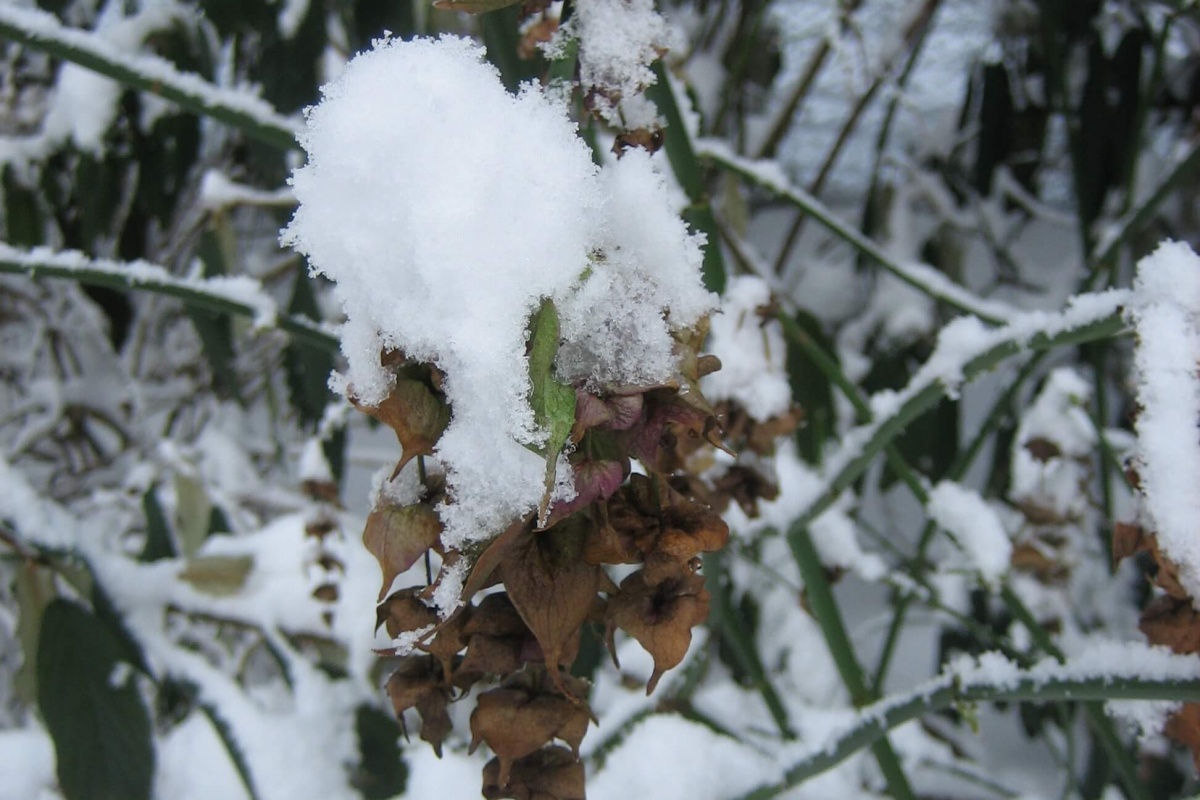 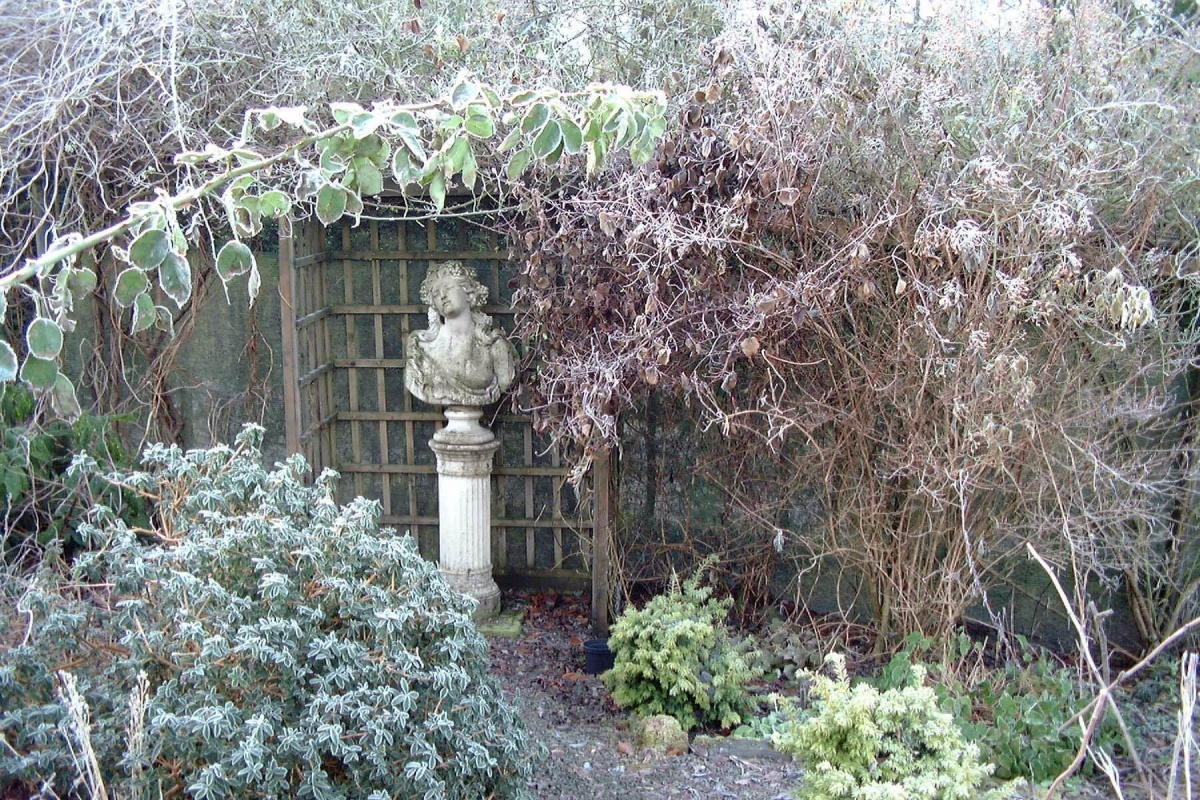 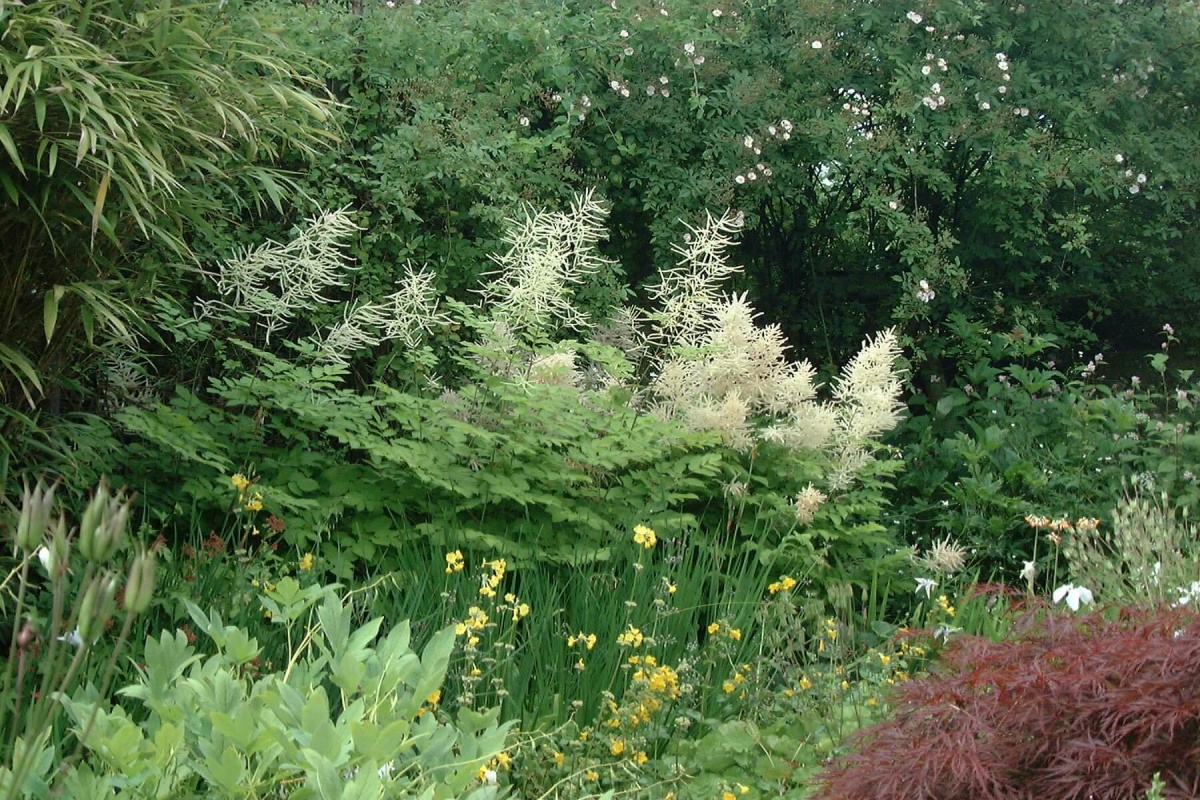 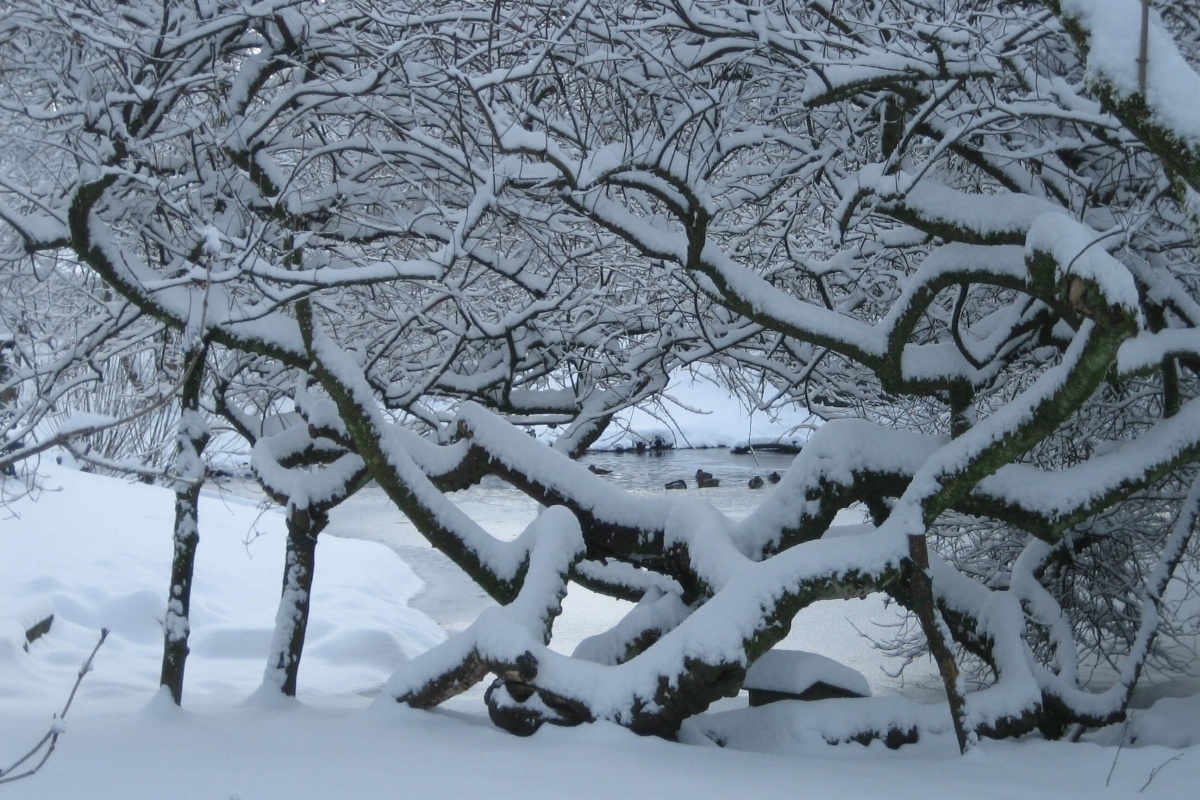 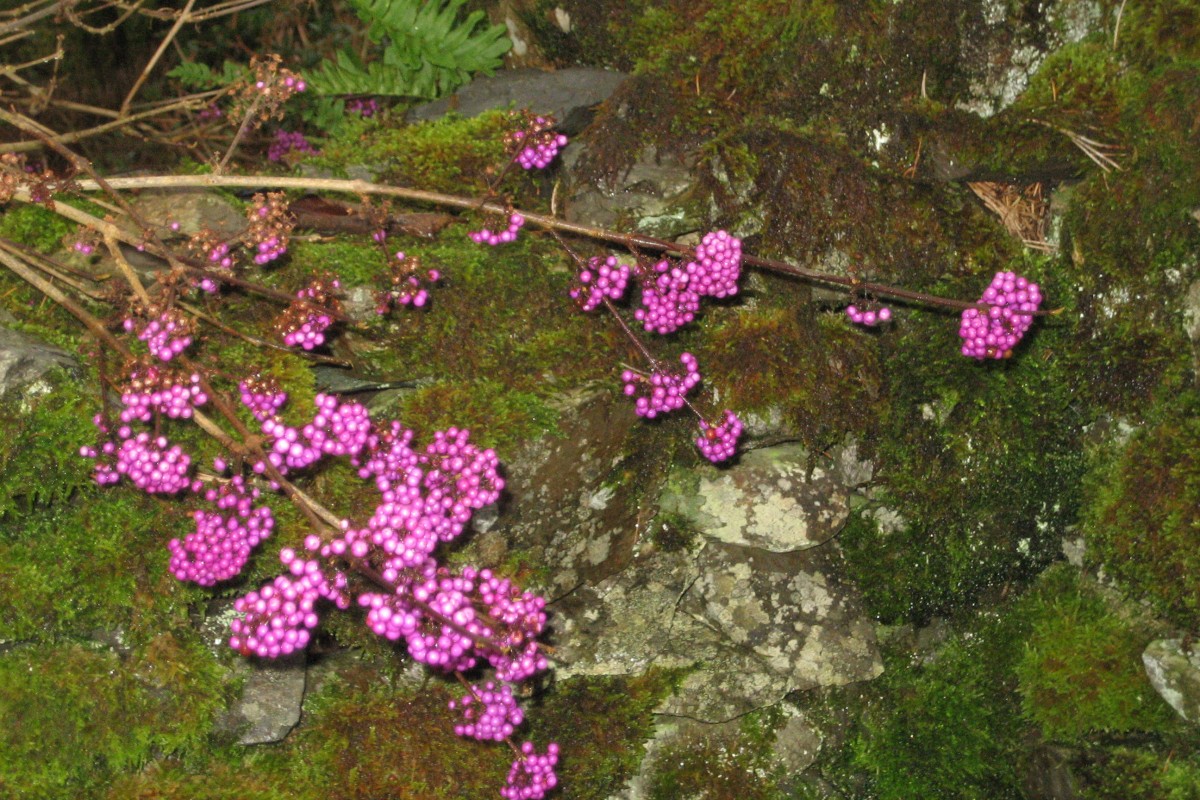 WINDY HALL GARDEN WILL BE OPEN FOR THE NATIONAL GARDENS SCHEME

THE GARDEN WILL  OPEN FOR PRIVATE GROUPS BY PRIOR APPOINTMENT

At times during its 400 year history there has clearly been garden developed around the house but few traces survive and on arrival we were met by a plethora of old chicken sheds, bee hives and collapsed green houses.

In many places solid rock protrudes through the shallow soil and the house itself is built on a sloping foundation of rock (every room in the house is at a different level and some rooms have sloping floors). This is particularly evident in the conservatory where the walls are solid rock – the real thing.

The generations before us at Windy Hall had clearly never thrown anything away, there being great heaps of bottles and rubbish everywhere. The property had been used for car repairs and many are the car parts we collected up and binned. As we cleared in outward circles from the house we accumulated bags of debris and, when we had a load, the Council would collect and take it to the Windermere domestic refuse tip, a mile away. Some years later this site became filled to capacity, was restored and put up for auction. Ours was the highest bid and so we became owners of 10 acres of land, some  of it underlain by our very own garbage.

Birches, willows and oaks had been coppiced for years on the hillside behind the house and interplanted with Christmas trees. For some years people visited us in December, come to collect their tree. We have selectively thinned trees, partly to enable us to plant new ones but also to develop a structure of woodland with glades – the spaces in a woodland garden are more important than the tree covered areas.

Apart from digging the two large ponds all our work on site has been accomplished with hand tools, including a hand operated tree stump winch. This has led to the entire microtopography of the garden being in sympathy with the wider landforms and contours of the site. There are no straight lines or truly level areas anywhere.

Clearing showed the irregularity of soil pockets and we carefully guarded this precious soil, using rocks for making paths and walls. In fact, the distribution of soil pockets largely governs where one can plant and what one can plant. The climate here also dominates much of ones garden design and planting – high winds from the west dictate that we garden in the lee of windbreaks and high rainfall (70 inches a year) governs many of our plant choices. The rock type and weather have led to development of an acid soil and so we have planted hundreds of rhododendrons, camellias, hydrangeas, magnolias and stewartias. We compost and shred all the plant debris in the garden and this mulch helps to thicken our generally thin soil and add nutrients to balance those lost from leaching by the frequent rainfall.

In our quest to understand how we might garden our few fellside acres we have visited many gardens, read many books and magazines and joined various horticultural societies. Among these the Royal Horticultural Society , (for 20 years David judged at Chelsea) and our local Lakeland Horticultural Society. Our pheasant conservation trips to Nepal, the NW Frontier of Pakistan and western China also demonstrated to us what might be grown in miniature ‘Himalayan gardens’ with exposed rock, thin soils and high rainfall. We also visited Japan for several weeks with the Japanese Garden Society. and were bowled over by many aspects of their garden style, particularly the idea of ‘borrowed landscape’ and the subtle use of stone, moss and ferns. Some of these concepts we have used in our garden, although nowhere do we have a ‘Japanese Garden’. The local climate here is ideal for many mosses and ferns and we have made a feature of these British Pteridological Society. developing a ‘Wild Garden’, though somewhat different from that envisaged by William Robinson.

We also wanted to make a contribution to plant conservation and joined Plant Heritage. In 1990 we set up National Collections of Aruncus and Filipendula to complement the Astilbe Collection, maintained by the Lakeland Horticultural Society, at the nearby Holehird Gardens. All these genera grow well in Lakeland. Sadly we have recently given up the Filipendula collection as were unable to maintain it adequately. In 2012 the Plant Heritage AGM was held in Lancaster and the delegates visited Windy Hall, a very perceptive article was written by Gillian Spencer about the visit – Plant Heritage 2012 AGM.

At first, we gardened for our own enjoyment, but over the past 20 years we have come to enjoy sharing the garden with others and have opened for the National Gardens Scheme. and other groups and societies. The NGS openings would not have been possible without the help and support of a group of friends who have manned the gate, kitchen and plant sales – many since we first opened in 1993. Thank you all.

Five years ago, when she retired, Diane became NGS County Organiser for Cumbria. Since 1927 this organisation has been opening private gardens to the public to raise money for charity; initially as part of QNI (District Nurses) but since 1980 as an independent charity. The NGS has raised £24m in the last 10 years and is the largest individual funder of the caring and nursing charities it supports.

Over the years we have had visits from several professional photographers; Val Corbett , Claire Takacs, Carole Drake who is creating a gallery of her Windy Hall images, Fiona Lea and, most recently, Marianne Majerus. These photographers have contributed images to various books and articles about the garden (Val Corbett, Gardens of the Lake District; Marianne Majerus, Die geheimen Gärten von England; Carole Drake, The English Garden).

In 2012 we were contacted by a Japanese TV company (NHK) wanting to film a ‘cottage garden’ as part of a programme about Beatrix Potter. They visited, liked the garden, saw our sheep and learned about our NGS opening. This resulted in a Japanese documentary on Beatrix Potter featuring Diane cooking lamb and NGS open day visitors being interviewed about their experience. All rather unexpected.

In June 2015 the garden was featured in the Gardners World. However this episode seems to be one of the few that it is not possible to view! But we have managed to salvage this clip.

Two days later, when we were open for the NGS we were inundated. Over 550 visitors arrived, ate all the cake, bought all the plants and – we hope – enjoyed their visit.

As a result of a Telegraph article written by Bunny Guiness, on gardening with moss, we were interviewed by Eric Robson for the Easter 2015 Gardeners Question Time programme.

Comments on, and photographs of, the garden are also appearing in blogs – Green Tapestry; something we never envisaged.

For some years Sue and Terry Goodwill at Primrose Bank Nursery have bought sheep from us for their flock at the nursery. The flock  is not registered – it is there for the enjoyment of the visitors (and Sue and Terry).  This autumn Windy Hall Euxenite (a 4 horned tup) traveled over the Pennines to join the flock.

WINDY HALL GARDEN WILL BE OPEN FOR THE NATIONAL GARDENS SCHEME

THE GARDEN IS  OPEN FOR PRIVATE GROUPS BY PRIOR APPOINTMENT.